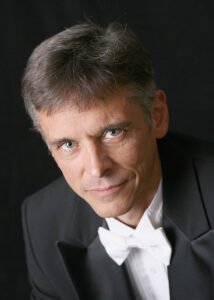 At the University of Louisville, Frederick Speck directs the Wind Ensemble and New Music Ensemble, teaches conducting, and serves as Chair for the Department of Performance Studies. In addition, he is the artistic director and conductor of Chamber Winds Louisville and the Louisville Concert Band. Ensembles led by Speck have earned praise for being “crisply responsive” with “terrific verve…displaying mastery” (The Courier Journal, Louisville). Under his leadership, ensembles have been invited to perform at KMEA Conferences, CBDNA Southern Division Conferences, the MENC National Conference, the CBDNA National Conference, the Midwest Clinic, the Jungfrau Music Festival in Interlaken, Switzerland, and World Association for Symphonic Bands and Ensembles Conferences in Killarney, Ireland and San Jose, California and the American Bandmasters Association Convention. Following a Wind Ensemble concert of Grawemeyer Award Winners in Carnegie Hall, Sequenza21 reported, “Speck’s energy and momentum concluded the concert with a gripping interpretation of John Corigliano’s  Tarantella from Symphony No. 1…Thunderous applause from a captivated audience greeted Mr. Speck and Mr. Corigliano, proof of both performer’s and composer’s ability to move listeners.”

Speck has conducted throughout the United States and internationally. In 2006, his guest conducting residency at the Szymanowski Conservatory in Katowice, Poland led to the inaugural concert of the Conservatory Wind Orchestra. A champion of new music, he has collaborated with composers including Karel Husa, John Corigliano, Joan Tower, Per Nørgård, Chen Yi, Steven Stucky, Sebastian Currier and others in preparing performances of their works.

As a composer, his music has been widely performed. The New York Times has cited his work as, “vivid driven music,” and the Louisville Courier Journal as “consummate orchestration in an age of virtually limitless soundscapes.” Speck’s music has been performed by such ensembles as the Louisville Orchestra, the Denver Symphony, the Senzoku Gakuen Wind Ensemble, the Eastman Wind Ensemble, and Speculum Musicae, and recorded by such artists as Richard Stoltzman, Paul York, Brett Shuster and the Washington Winds. Twice the recipient of the University of Louisville President’s Award for Outstanding Scholarship, Research and Creativity, his work has also been recognized through fellowships and commissions from the Barlow Endowment, the National Endowment for the Arts, the Pennsylvania Council for the Arts and the Indiana Arts Commission.

He is an elected member of the American Bandmasters Association and President of the College Band Directors National Association Southern Division. Speck earned the B.M. and M.M. from Bowling Green State University and the D.M.A. from the University of Maryland.

The musicians of the Louisville Concert Band and Chamber Winds Louisville enjoy sharing their enthusiasm for the performance of wind repertoire in all of its dimensions. Concerts typically include chamber music, solos with the ensemble, and full-cast concert band works. The repertoire is diverse, spanning harmoniemusik to the most current new works, and often including at least one piece by a composer of whose contributions have a special place in the development of the wind band (Mennin, Creston, Persichetti, Grainger, Sousa, Fillmore, and others). The integration of full ensemble with chamber pieces brings great variety to the repertoire and keeps the listener engaged in the concert event. Frederick Speck, the director, is surrounded by ensemble members who are educators (both in music and other disciplines), professional musicians, and other excellent performers whose professions are in non-music fields. All are drawn together because of their appreciation for the fellowship of ensemble performance and the joy of sharing it with appreciative audiences. In addition to regular season concerts, the ensemble has performed at the 2011 Kentucky Music Educators Association Conference and the 2013 Midwest Clinic: An International Band and Orchestra Conference.